In 1986, the ceiling fan world went through a major shake-up, thanks to an industrious and talented designer named Ron Rezek.

Before 1986, ceiling fans resembled those from the Victorian era. They had a traditional, ornate look a look that had lasted well over a century. Rezek, however, was a master of contemporary design, leading him to create a new ceiling fan aesthetic, the first one being the Stratos, which is still available today.

Regarding his design sensibilities, The Sun Sentinel reports, “Rezek’s philosophy has been to subtract as many of the details as possible and allow the fan to rely on what he calls ‘pure geometry.’ His designs eliminate the blade irons and metal brackets that attach the wooden blades to the rotor. Instead, the blades are inserted into the rotor. Pull chains have been replaced with a wall-mounted control or hand-held remote.”

In 1997, Rezek founded The Modern Fan Co. in Ashland, Oregon. Its website says, “Our products celebrate the modern idiom through mechanical simplification, geometric forms, and contemporary finishes, and are intended to meet the needs of the professional specifier and the design-minded homeowner alike.

At Wolfers, we’re big “fans” of The Modern Fan Co. and Ron Rezek. We appreciate the fans’ clean, sleek designs as well as their quiet and efficient motors. These ceiling fans fit in beautifully in a wide variety of contemporary spaces, both commercial and residential alike.

Below are some of our favorite pieces from the leader in contemporary ceiling fans.

1. Ball Fan. Simple, yet elegant. This ceiling fan will add just the right touch of panache to any room. Blades are available in white, brushed aluminum (pictured below), and maple. See this fan in action in our Allston and Waltham showrooms. Available in 42″ and 52″. 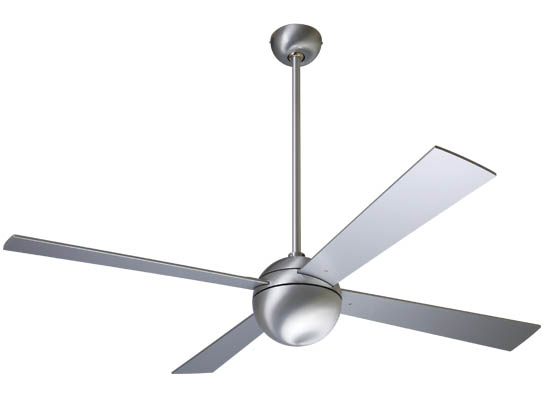 2. Altus Fan. While the look and feel of the Ball Fan above doesn’t change as much between the light and non-light versions, that isn’t the case with the Altus fan.

Here’s the non-light version, which conjures up a bit of a futuristic feel. 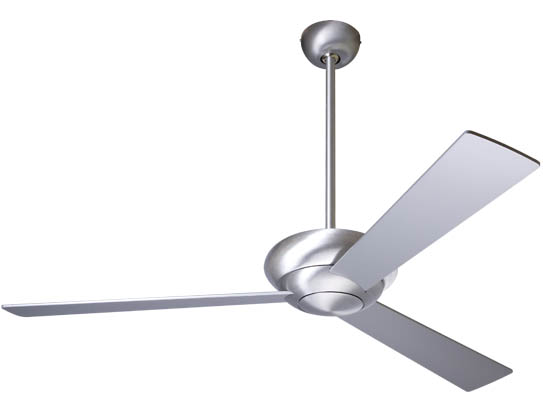 And here’s the fan with a light: 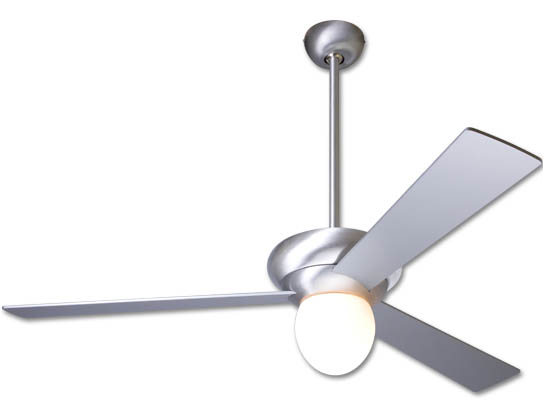 You can’t go wrong with either one it just depends on the vibe you’re going for and what other light sources you already have available in the room. Available in 36″, 42″, and 52″. You can check out the Altus fan in our Allston and Waltham showrooms as well.

3. Velo Hugger. This smart-looking ceiling fan ships in a 14-inch overall length configuration, making it a perfect solution for lower ceilings. Available in Allston and Waltham. 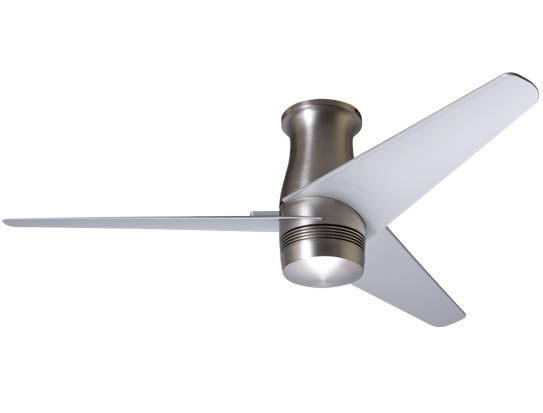 As The Modern Fan Co. notes, “Building codes require that the blades of a ceiling fan must be at least 7 feet above the floor. Generally, we recommend hanging the fan as far down from the ceiling as is visually appropriate while maintaining the 7-foot blade clearance above the floorâ€¦ We generally recommend one of our hugger models for 8-foot ceilings. Keep in mind that optional light kits may add several inches to the overall length of the fan.”

4. Torsion. The great thing about the Modern Fan Co. is that you can find fans that don’t look like anything you’ve ever seen before, like this one. This fan is available with 42″, 52″ or 62″ blade spans in white, nickel, black, maple, or mahogany. 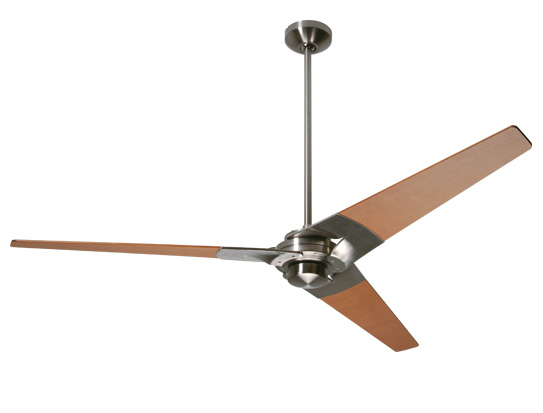 You’ll find the Torsion on display in our Allston showroom, along with plenty of other distinctive ceiling fan options that are sure to delight and inspire. Come visit us soon!