It’s hard to believe December is more than halfway over and 2019 is lurking in the wings. As we wrap up the year, we thought we’d share highlights from a couple of projects we recently completed.

Both projects were in private residences and featured lighting design by our very own Susan Arnold. They also included technology design and motorized shading that Susan coordinated with her colleagues at System 7 and The Boston Shade Company.

We love projects like these that draw upon the strengths of all three of our brands, involving lighting and shading plus a sleek and sophisticated control system to operate it all!

Don’t you just love the bright, glorious sunshine pouring through the windows in the picture below? Here’s the thing: even though natural daylight is usually welcome, window treatments are useful when a little less light is desired (nap time, anyone?). Not to mention that light streaming in throughout the day can fade and age furnishings. 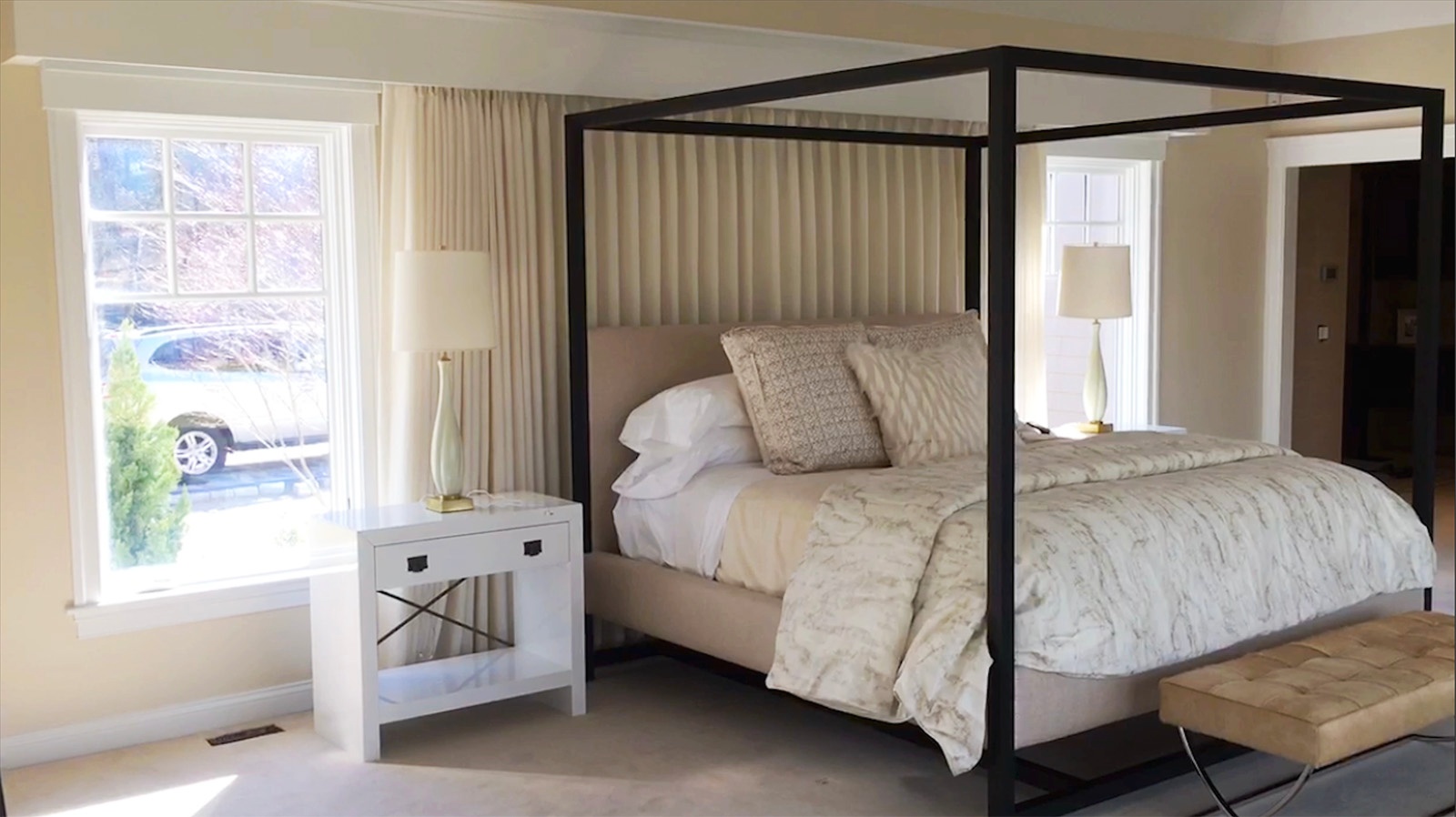 For a practical and decorative solution, the homeowners chose room-darkening shades paired with motorized drapery, all controlled with the touch of a button. The room-darkening shades are roller shades, hidden away up in a shade pocket when not in use (and not visible in the above photo). The motorized drapery is more decorative, gathered behind the headboard of the bed until it’s needed.

Specifying and installing shades is a careful technical process, and this project was no exception. Once the windows were in, we confirmed the final dimensions of the shades with field measurements since each shade was custom cut and made to order.

In this case, the shade pockets were also custom-made on site after the room was plastered and painted.  For this project, the builder designed the shade pocket, and the design was reviewed by our team at The Boston Shade Company to confirm the shade installation would go without a hitch. Custom-making the pocket onsite ensured it would be an architectural element that seamlessly integrated with the rest of the décor.

The picture below shows the shade brackets in a nice straight line. The builder used a laser level to align them perfectly. 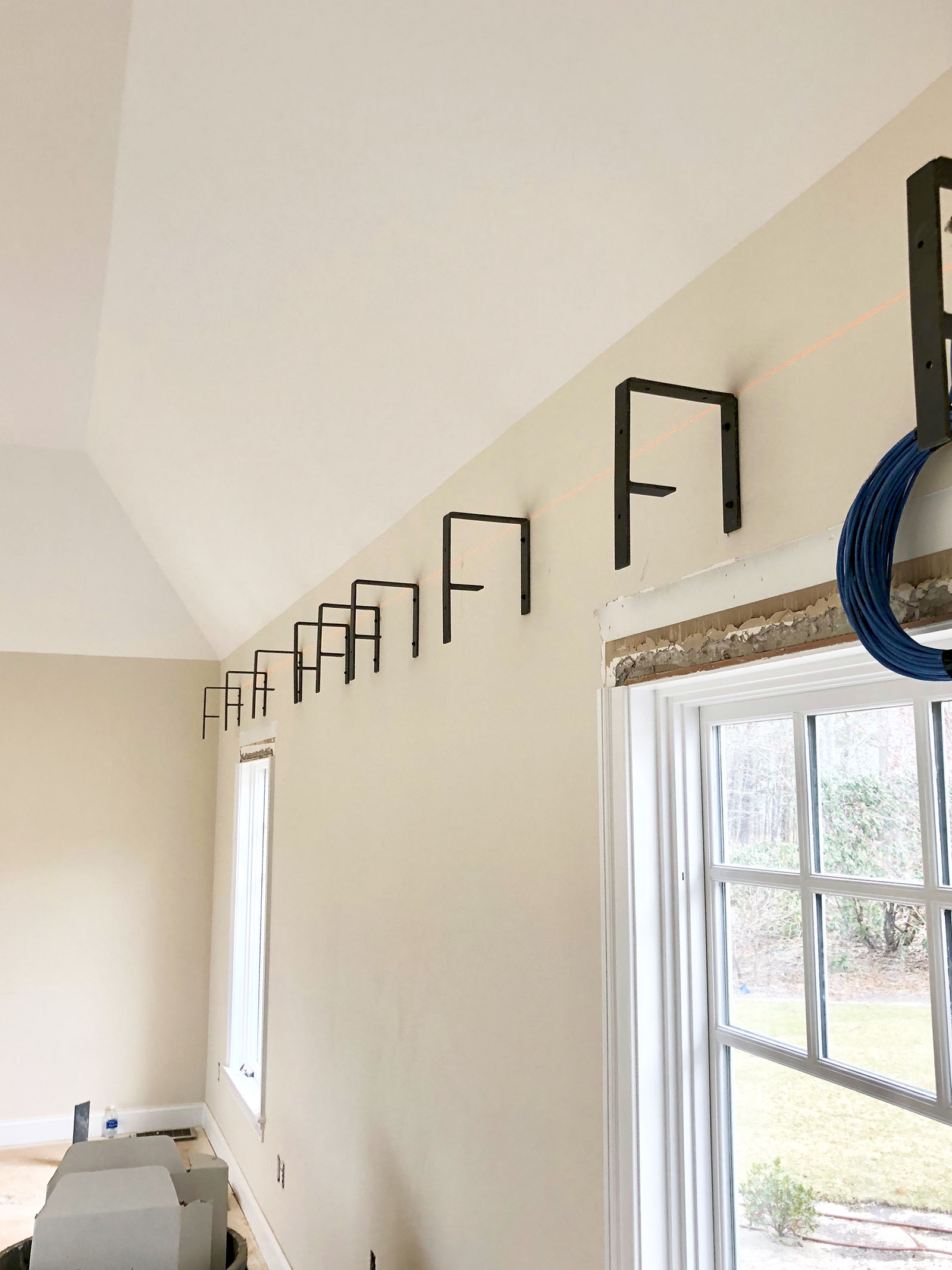 Once alignment was confirmed, the pocket began to take shape. The team made additional measurements and adjustments to ensure everything matched the design in the CAD drawings. 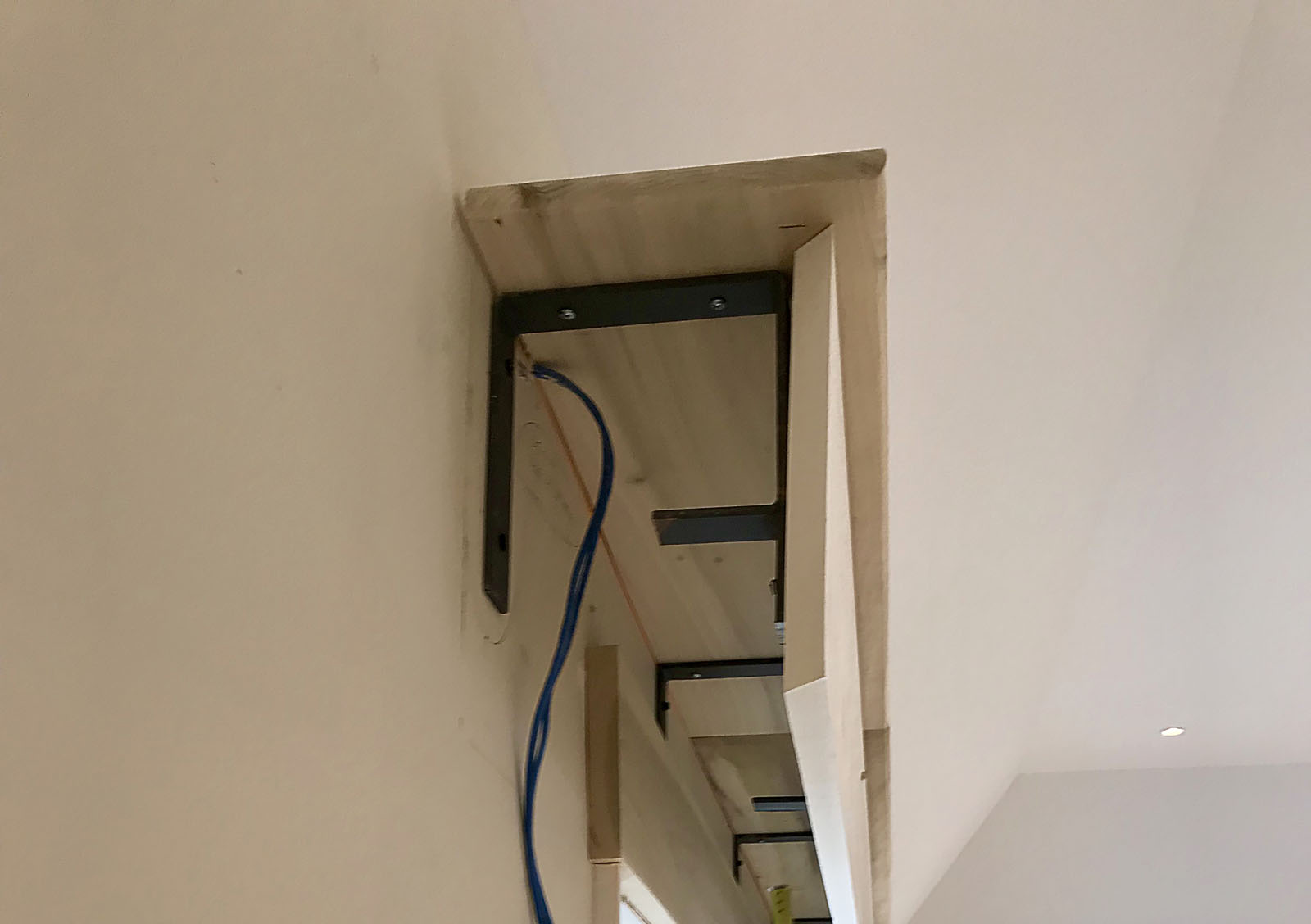 Check out the completed pocket below. 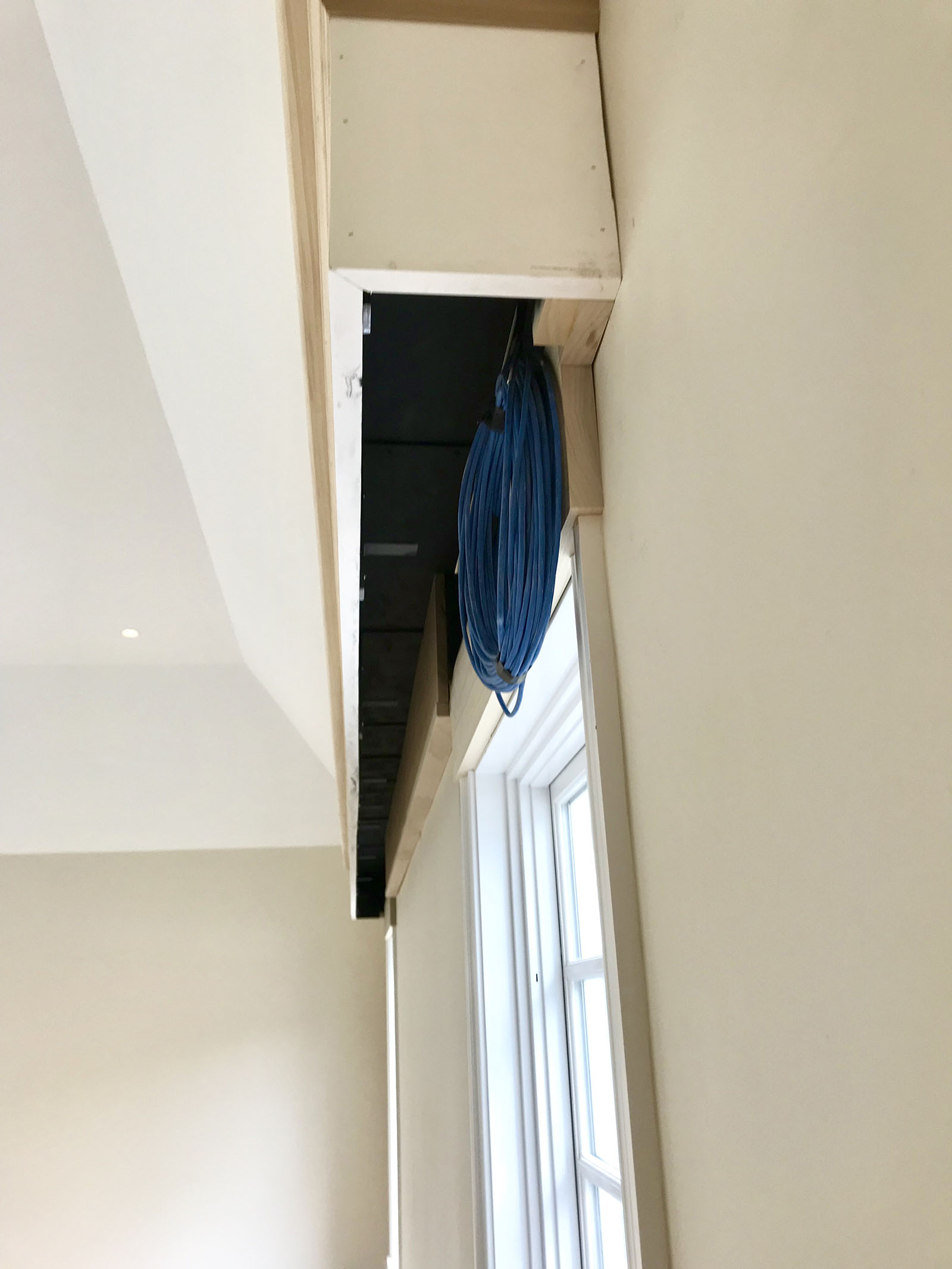 See the neatly coiled wires in the center of the image? Those are the shade’s power-and-control wires, which we ran alongside the electrician’s wiring back in the rough-wire stage of this project. The wires run back to shade power panels, which are located in the basement and allow the shades to be controlled by the Lutron HomeWorks control system the homeowners chose.

One of the most convenient aspects of a control system like HomeWorks is that you can control multiple elements of your home at once: lighting, shading, and home technology.

In this master bedroom, the homeowners can control their shades and lights at the same time. They can use either a smartphone/tablet app or a keypad like the one below that HomeWorks offers as an alternative to the typical bank of switches. 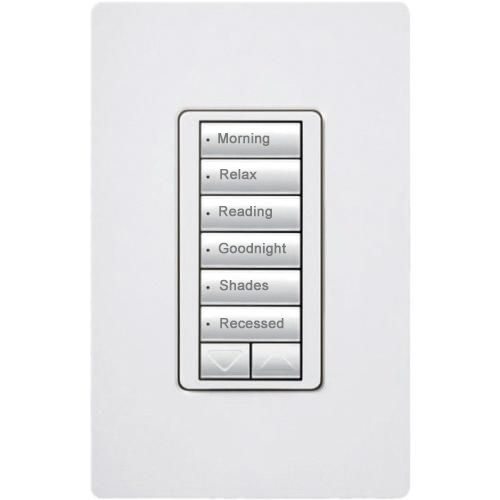 Each button on the keypad controls groups of light fixtures or shades together, creating different “scenes.” Our System 7 programmers configure the control system and assign a scene to each button. The buttons are then engraved with the names of the scenes so the homeowners can tell at a glance what each one does.

For example, in this master bedroom, a “Goodnight” scene closes the shades and drapes and turns off the lights all at once. Talk about a convenient feature at the end of a long day!

The keypad streamlines and simplifies the look of the wall by distilling multiple switches into one single keypad. Plus, there’s no more fumbling through endless switches to discover the one you’re looking for.

Here are the finished shades in action, first opening and then closing together.

Now, let’s move onto the bathroom…

In this bathroom at the same residence, crisply styled Visual Comfort sconces complement the clean aesthetic of the floating vanity. 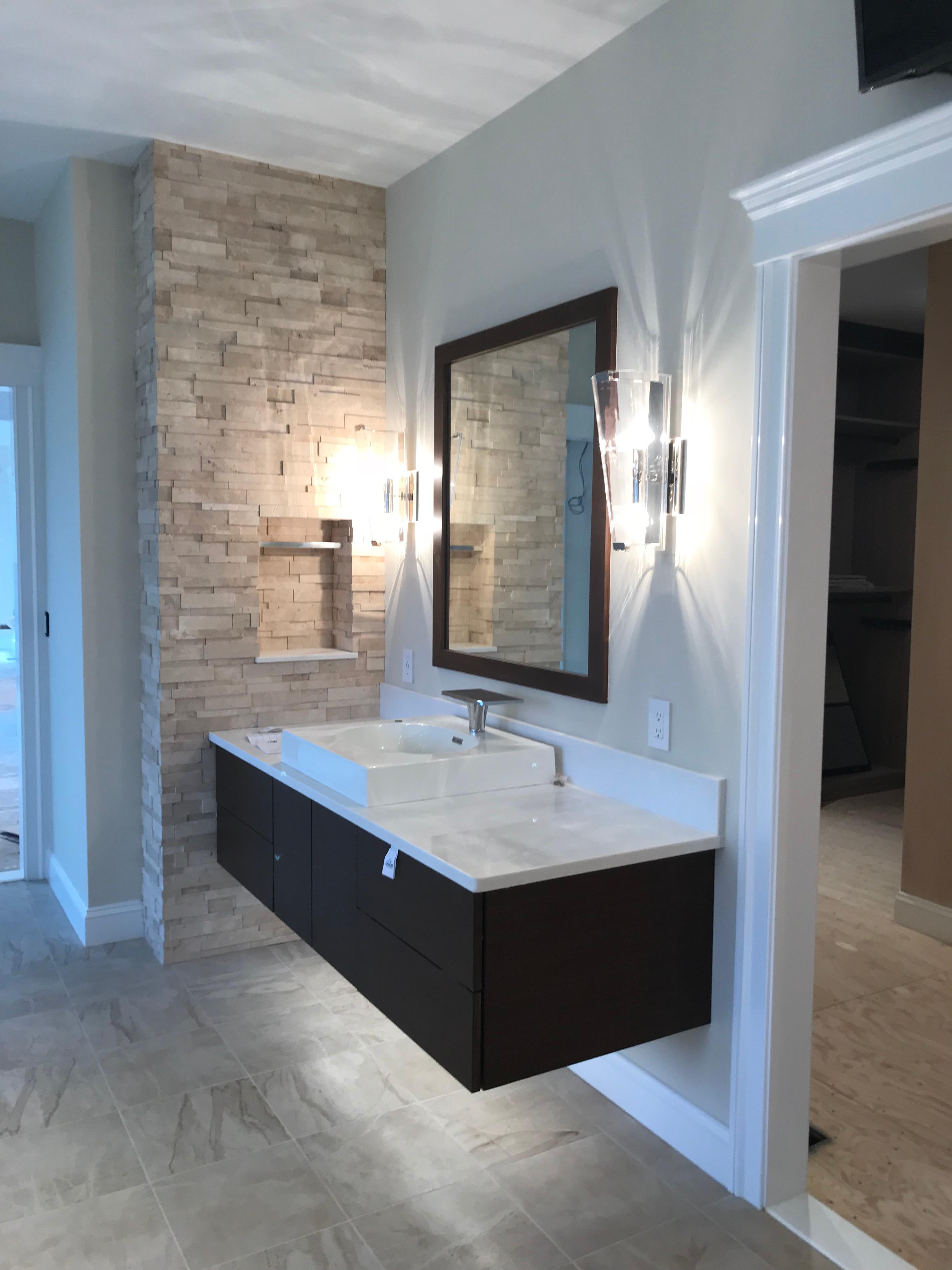 And the vanity truly does appear to be floating thanks to an LED strip by Luminii. The LED strip is mounted underneath the vanity for accent lighting that is not only visually interesting, but also makes for a convenient nightlight.

In the second private residence, a key feature in the master bath is a nook with a Whirlpool tub tucked under a decorative multi-faceted ceiling.

Here, we see the project in the midst of construction, when everything has been framed. 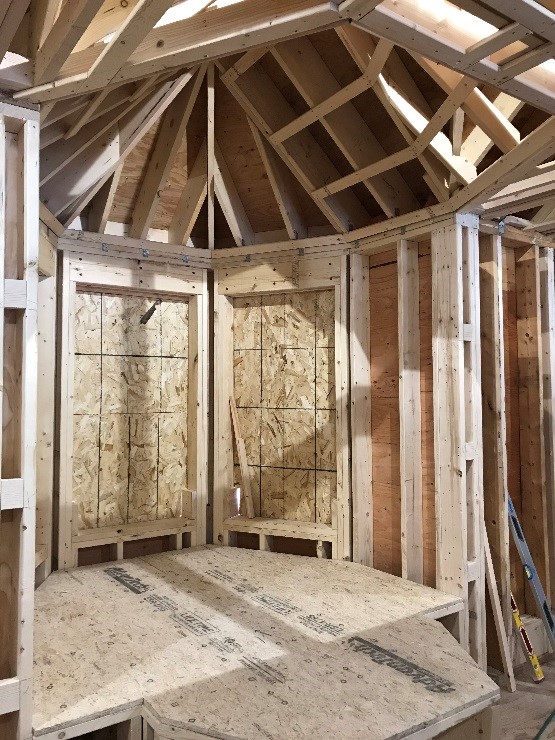 The plywood panels in the middle of the wall will become windows once everything is finished, and the Whirlpool tub will be sunk into the platform in front of them.

This next photo is taken from a slightly different angle. It shows the project after everything has been boarded and the windows are in place. 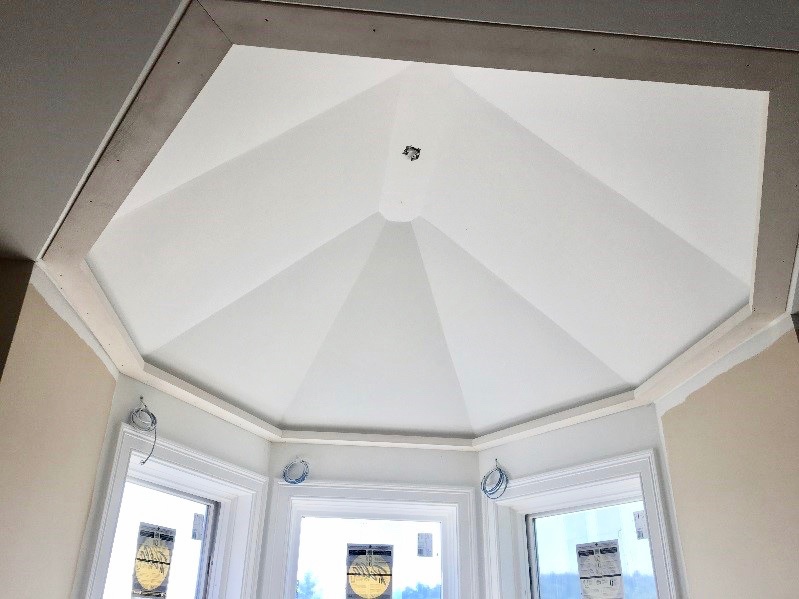 Notice the wires above each window? Those, of course, are power-and-control wires for the shades! This residence also has motorized shades along with a Lutron RadioRA system that controls the lighting, shading, and technology in the home. RadioRA is similar to the HomeWorks system in the previous residence; you operate it via keypad (or an app on your smartphone or tablet).

A distinctive ceiling like this one deserves some special lighting to celebrate the architecture. Susan recommended adding a layer of light that would highlight the ceiling and provide some soft ambient light for the space. She specified an RGBW LED strip by Luminii to trace the edge of the dome, lighting up towards the center of the ceiling.

An RGBW LED strip includes Red, Green, Blue, and White LEDs and allows you to change the color of the light from white to nearly any shade of the rainbow, including a beautiful range of pastel colors. Susan brought a sample of the LED strip to the job site during construction so the homeowners could see what it would look like in the space. They loved the look and agreed it was a great way to accentuate the unique shape of the ceiling.

The LED strip is housed within a sleek aluminum channel and is cut and assembled to length at the factory for easy installation. To hide the channel as it ran around the edge of the ceiling dome, the carpenter on this project added a bit of extra molding. He then routed into the molding to make a place for the channel to sit, just out of sight.

In addition to the LED strip around the edge, the homeowners chose an LED multi-port pendant chandelier for the center of the nook. (In the above photo, notice the dark spot in the middle of the ceiling that’s the electrical box for the chandelier.)

Finally, here are all the components together: the RGBW lighting, the chandelier, and the motorized shades for privacy and light control. 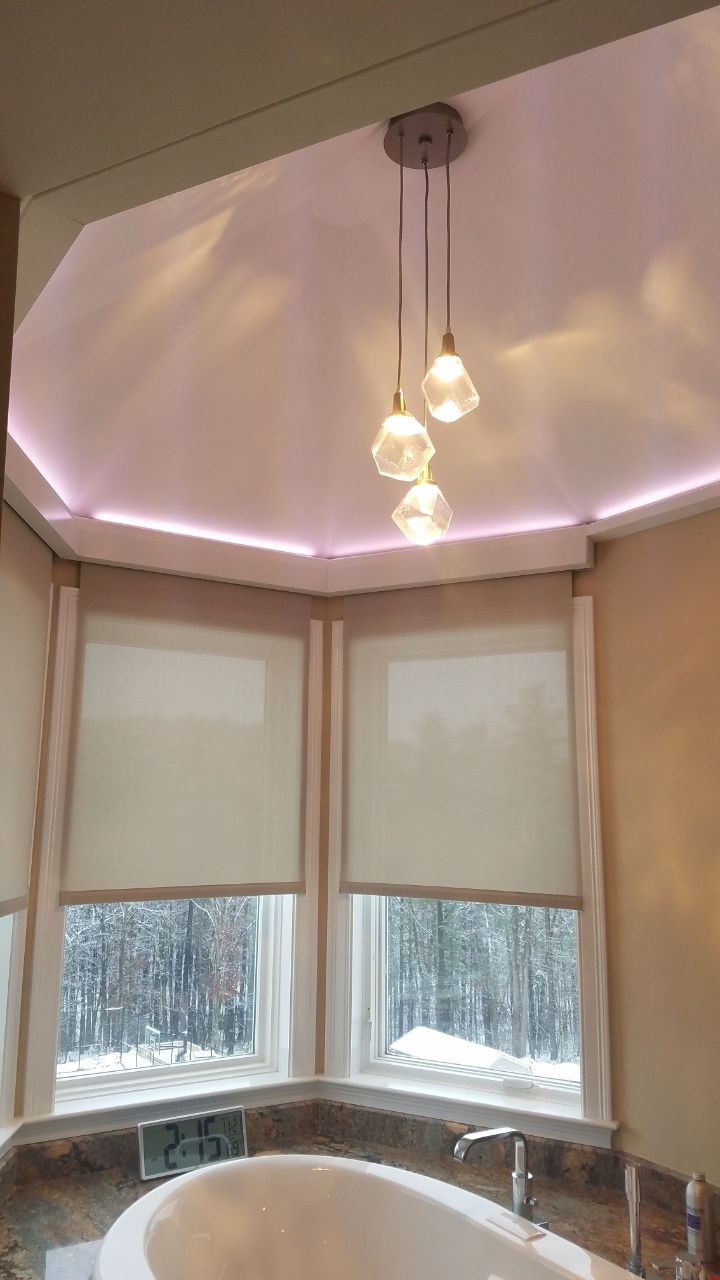 The multi-port pendant chandelier is from Hammerton Studio’s Gem Collection, which features hand-blown glass crafted into softly faceted shapes. We love how the LED light hidden in the top of each shade shimmers playfully through the glass and sends splashes of light in all directions. The homeowners also chose clear glass shades so the pendants would pick up some color from the RGBW lighting for a playful, luminous centerpiece.

There were a couple of challenges when it came to the chandelier. The plate that the pendants are suspended from is 20″ wide, which would have been far too large for the 9″ flat portion in the center of the ceiling. This chandelier also includes three different sizes of pendants, and the larger two sizes were a little too big and would have overwhelmed the little tub nook.

Luckily, we were able to work with Hammerton Studio to customize the fixture for this project, slimming the mounting plate down to fit the flat portion of the ceiling and using three small Gem pendants rather than the graduated sizes. The finished result was a beautifully detailed corner of the master bath. 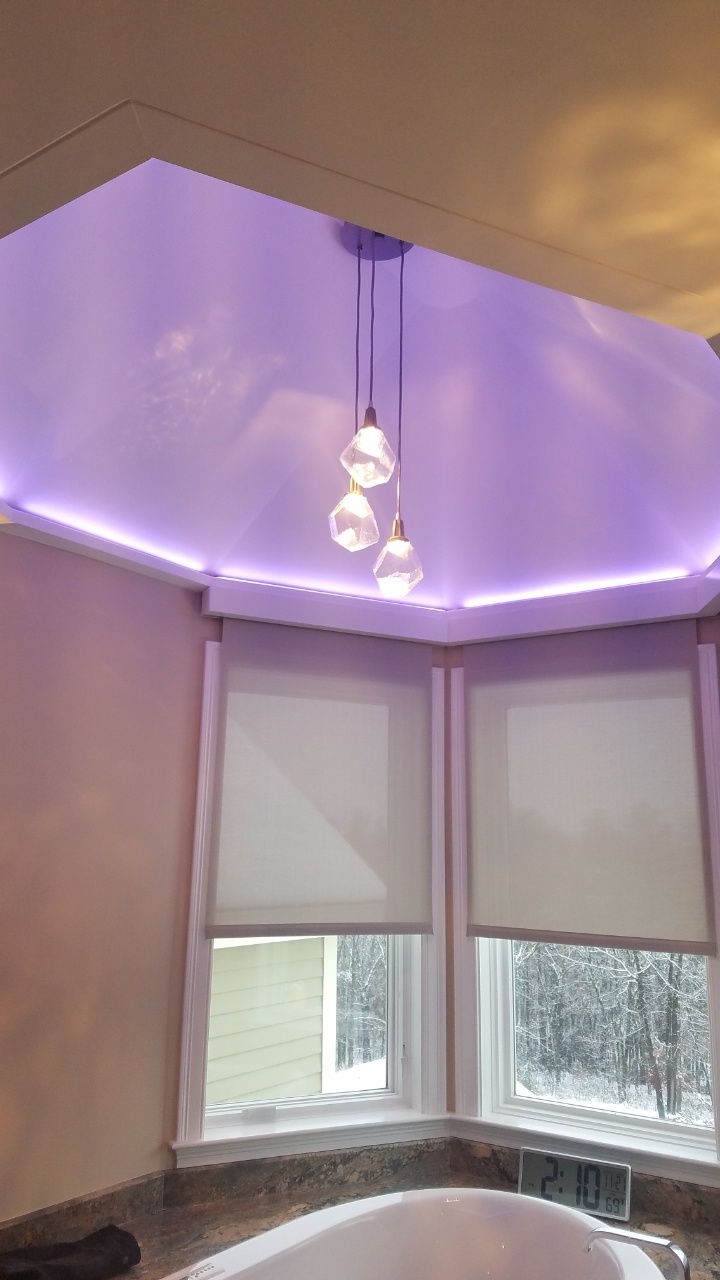 We hope you enjoyed checking out these projects! We’d welcome the opportunity to chat with you about similar possibilities for your lighting and home automation needs in the upcoming year. Make an appointment with one of our experts soon.

On behalf of all of us from Wolfers, we wish you a joyful holiday season and a happy, healthy, and prosperous 2019!